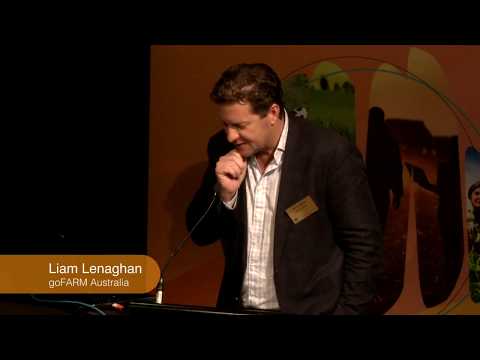 LIAM LENAGHAN: GoFARM was founded five years ago by myself And I was fortunate to be introduced to the Costa family

And Robert Costa is our chairman, and the Costa family is an investor in the business, alongside my own Quite there from Rob, which I think it's important to the way that we think about what we do, and we're very strong believers in the future of Australian agriculture I'm fifth generation Rob's multigenerational too, albeit coming from horticulture and agribusiness And I just thought that was worth posting before we get too far along the road

So goFARM is a Melbourne-based business We're a small team there We're about 10 and growing steadily It's Australian owned, and it's all private investment capital Our focus is very much on being a productivity investor

So we look for underutilised and undercapitalized assets and seek to deploy smart capital and smart people and smart technologies What drives us is really to find those opportunities where we can have a material impact on productivity, a material impact on earnings, and by extension, a material impact on capital values At present, we've got about 46,000 hectares under control And as indicated, that's across a number of commodities We do focus on plant-based industries only, and that's, I guess, a bias towards our own knowledge set and experience rather than a slight against livestock

So our purpose, we're guided by that, and it's threefold And it holds real meaning to us The first is that we're about improving Australian agriculture, and that's central to the way we think We're also about creating wealth for our investors, because if we don't do that, it's a fairly short game And the third pillar of our purpose is about leaving a positive legacy for the assets and communities in which we invest

And so any investment or acquisition we look at has to pass muster with those three pillars So we're talking about transformational investment, but first, I just thought I'd restate the case for the transformational opportunity that exists 140 million people entering the middle class around the globe this year, predicted to go to 170 million in five years' time In the very near future, 2019, the expectation is there is going to be 32 billion people around the world in the middle class

It's going to be the first time in modern history that there's been more people living in the middle class or in the rich class than in the poor Add to that the $35 trillion worth of spending that middle class conducts each year, and that's about 1/3 of the global economy And that that's growing at a faster rate than global GDP Add to that the fact that 88% percent of the next billion people is at our doorstep, in Asia So our conclusion is it's a transformational event, and that requires transformational investment

It delivers appreciable scale And it's supported by proven [INAUDIBLE] management In terms of making investment decisions, we apply the following stages First is purpose, and I've touched on that The second is applied commercial research

And out of a small head office team of 10, we've got three staff dedicated to commercial research activities So looking at opportunities for land use change Looking at the role that technology might have to unlock opportunities In addition to that, we have an independent advisory committee too, the goFARM Commercial Research Advisory Panel, which has the acronym of CRAP The members of goFARM CRAP aren't that pleased about be the acronym

They prefer to call themselves a committee rather than a panel But I'm sticking with committee, and I've got naming rights Panel, rather So from the research comes the investment strategy, and then of course, the hard work of finding the assets that support our strategies and then acquiring bringing them on board and leading the transformation, in whatever shape that might be All well and good

What's that look like? I thought I'd just run you through the family album of what we've got going presently, just for some context The first one's a Greenfield development, Maffra That's a property that sits just south of Balranald on the Murrumbidgee River Our research had concluded, dating back to 2013, that global demand for almonds was real It was outstripping supply

Compound annual growth rates over a decade of near double digits There is a significant supply risk because of the geographical concentration of almond production Nearly 85% of the world's almonds coming out of California There was a California water crisis occurring, and of course, the change in legislation that's happening in parallel And so we could see that not only were those pressures there, but to meet this growing supply, there's going to be the need for Greenfield developments

And was placing more investment in California the answer? Or would or should we look outside of that region? Australia's the next best destination Syria is the third best We weren't keen on putting money there So we set about scanning the Murrumbidgee and Murray River from Narrandera through to Renmark, effectively So we've acquired there a nearly 5,500 acre growing property

That's what it looked like at purchase And that was in 2015 At the time, that property was running as a family operation It was one of three farms that were growing on and basically supporting half a full-time position and generating about $1 million worth of revenue Our first stage was we're going through licencing and approvals

And the planning for the development was actually to bring it into the 21st century just from a dry land farming perspective So going through the process of fence removal and creating or introducing no-till and capturing the benefits of width and speed that exists in broad acre farming And then going from there with approvals in hand and finance in the bank, moving onto the let's-build-it-type phase During the reconfiguration of that asset, we created 60 jobs on that farm for effectively a nine-month period in phase one, and now we've got the same 60 people back building stage two There's the central water source for that property, fed from the Murrumbidgee River

There are the trees as of about two weeks ago So they were planted in August last year So what's that make them? About six months old And a few stats on that project So there's 540,000 almond trees being planted over two years

5,000 kilometres of drip tube Importantly, the people aspect, 60 jobs created during construction There's 12 full-time employees on farm presently, and there will be about another eight going after stage two $80 million commitment As I said, it was supporting half a full-time employee before we took it over, and it's going to support 20 within 12 months

And in a township of 2,500 people, that's an important contributor to the local economy That commitment now is for the next 30 years, the life of the orchard And we hope a following 30 beyond that And so this project's ticking a few boxes for us in terms of improving Australian agriculture, contributing to exports, and we heard earlier that almonds are now the largest horticultural export for Australia We're creating some wealth for investors, and we're leaving a positive legacy on the asset in that local community

Another project, Piambie, which was a Brownfield development It's over the river in Victoria, fronting the Murray River And that was a conversion of a pre-existing corporate vineyard It is about 2,300 acres under vines High water prices, wrong varieties, wrong configuration, wrong root stocks, and an irrigation system that was inappropriate for the landscape

And so it was a floundering, old, failing asset when we got a hold of it A little glimpse on the left-hand side as to what it looked like the day we got a hold of it So we acquired that in August and immediately went to work on it In just under 12 months, we removed 17 million vines, 600,000 treated pine posts, which were repurposed

Of all things, they went out of our vineyard and up the road 150 kilometres to Mildura to re-establish a vineyard 9,000 kilometres of wire, 3,000 kilometres of drip tube There was a hell of a lot of work went on There was 130 jobs created during that 12 months to repurpose that vineyard Some of the activities there as we move from vineyard to orchard

There were the trees last July, just planted Drip tubes there Stakes and guards And there they are about a week ago So moving along

That project's 200,000 trees, and we'll run through some of those stats It's a $40 million commitment An asset that was failing, and we could see the opportunity to reposition it So again, ticking the boxes in terms of our purpose Moving away from horticulture back to agriculture

We've got a little property near Narrandera, Morundah, in fact And it's an aggregation of a couple of properties It was a multigenerational asset Very well established family Old succession story

Family was scattered around the world, very little interest in farming And I suppose there's the incumbent's aged, so too the investment in the property It's a beautiful property, and by no means was it was rough, but by no means was it operating to its capacity So we saw that one as a fairly low-risk development play, for want of a better description So it was a mixed enterprise

There was some irrigation There was some dry land farming And there was a wool and beef operation As we do, we got in and made a mess So we pulled out 60 kilometres of internal fencing, and we ripped up about 9,000 hectares of underperforming pasture

We ran around with the AM-38 machine and did all our soil testing to determine what was missing and where, and we established all our different trial strips as well There's been about 6,500 tonnes of lime and gypsum go out, under variable rate There's been 60 kilometres of internal road network established for efficient movement from a central farm hub out to the field In the process, we went from 53 asymmetrical paddocks and line ways to 13 management zones covering just short of 10,000 hectares of arable land You can see there, that's, as the boys call it, the east-west superhighway, which is 15 kilometres long, and then farming north-south on 7k runs

So again, trying to capture the benefits of [INAUDIBLE] right technology, precision ag, but doing it with speed That's a bit more technology The way that we're partnered there with a local farming family They're very good operators and know what they're about I think I've covered that

So just in conclusion, Rowan, back to purpose So transformational investment, we're doing that with the prudent application of capital and technology and good people And I think we're satisfied at this stage that we're meeting our purpose in terms of making a contribution to Australian agriculture that's meaningful, creating wealth for our investors, and leaving a positive legacy for the assets in which we invest