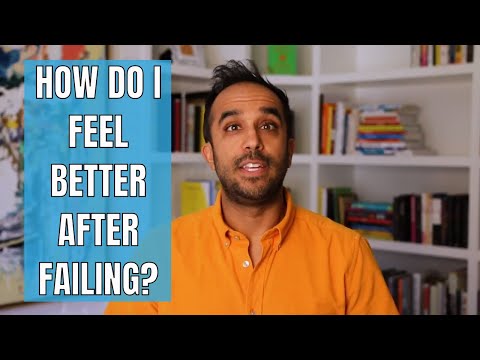 – How do I feel better after failing? Look, nobody likes failing Failing feels terrible

You've sucked at something you thought you were gonna be good at You did not get something you were striving for You wanted to get into that college and they said no You tried out for the sports team and they cut you This is a giant problem for everybody in the world, okay, so the fact that you're here right now means you're not alone

I feel this all the time And there's three sentences I came up with that actually help me with failures Three sentences that I say to myself or I write down or I even put on a little list or a journal entry that help me process my failures and not turn them into good things cause they aren't necessarily good things, but see them in a better light So what are my three phrases? Number one is I learned something new That's huge

So I learned something new from that troubled relationship, from trying out for that sports team, from applying to that college I wrote an essay about myself that I wouln't have written before I discovered I like volleyball more than I like basketball I discovered that, you know what, I was dating the wrong kind of person, maybe the wrong gender Like whatever it is, I learned something new Remember that sentence

And when you recognize the fact that interesting people try lots of things and fail at tons of them, you feel better about it You know, one of the most successful authors, I got a bunch of his books on my bookshelf right behind me, is Seth Godin He is the author of Purple Cow and Tribes and Linchpin He's one of the most preeminent marketing business writers in the world, and you know what he says? I'm prouder of my failures cause I learned more from them And he's had a ton of failures

And the third thing is I tried something new You know the first time I went out for sushi, did I like it? No It was disgusting I got these cold, slithery messes of dead fish going down my throat I didn't eat sushi for like five years

But for five years, I told myself I tried something new And that newness was worth it because even though I didn't like the experience, even though I failed at eating sushi, I still grew from it And if you could remember those three sentences, if you could remember those three statements, I did something interesting, I tried something new, I learned from this experience, then you will start processing your failure in a better light I'm not here to tell you that failure is great and perfect and it's gonna make you feel la-di-dah and you're gonna be all happy about it I'm not gonna tell you that cause I know failure stinks

But I'm gonna give you those three sentences because, if you can read and remember and maybe journal about them, you will start seeing your failure in a better context What's a failure you had that you are over today? Leave that in the comments below Tell us what it was and let's all learn from each other because, you know what? Here's one thing failure really loves, company And when you read the comments below, you'll feel like, oh, oh, oh, it puts my own things in perspective Thank you so much for subscribing to the Neil Pasricha channel on YouTube where every single video is meant to help us all live a more intentional life