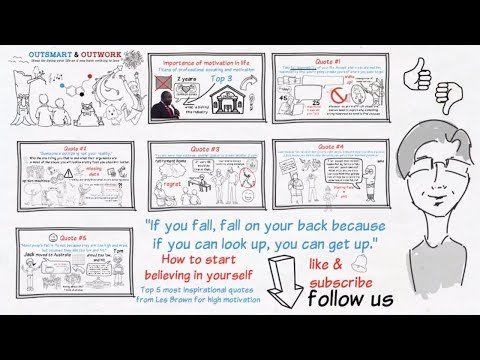 Hi guys! I will start by telling you that Les Brown was the one who made me curious about the importance of motivation in my life When I saw him speaking with such passion about things that sounded like common sense I decided to dig deeper and see what behind this industry really is, why is it so big and why so many people listen and watch motivational speakers

I will not get into detail because this is a subject for another day but after two years of going over most of the Titans of professional speaking and motivation my opinion is that Les Brown, now at the end of his career, is in the top three That said let's see the quotes I found to be the most inspirational "Take responsibility of your life except where you are and the responsibility that you are going to take yourself where you want to go" Imagine you are 45 and working for a company you don't care much about The payment is reasonable but you can't wait for Friday to come

Your younger 25 years old version comes for a coffee one evening and asks: "Why are you in this position? You finished college, you were always a hard worker, your passion was to repair cars and now you work in an office doing something you don't like day in and day out and you never repaired one car over the past 10 years What happened?" Both embarrassed and confused you start the story: "After I got married my first wife felt that being a mechanic was not something really cool so I decided to try something else We divorced after five years and I didn't have the courage to go back because I was 32, single and the jobs in the auto industry were not so many and the ones which were free were paid less than I was making The 25 years old says "I understand it was not your fault" and disappears You see

whenever we are in difficult situations and we need to explain why something wrong happened we tend to find excuses and in most of the cases we start by blaming other people, the economy, the government, our family and so on It's wrong We are the first person responsible for what happens in our life; we are the last man standing in our fight for happiness and fulfillment and everything that happens to us is a consequence of some decisions we took at some point

When we look somewhere else we lose We lose because one of the most difficult tasks we have in this life is to acknowledge 100 percent of our responsibility to our destiny No one will come to save you Wake up man! "Someone's opinion is not your reality" You know, people in general are opinion machines Two old ladies meet in the park and in five minutes they go from politics to who is doing what in the neighborhood and from the price of the onion to how the weather was 20 years ago in the summer

If you hear them, their tone is like they're absolutely sure their two cents can dramatically change the world In reality we rarely know what we are speaking about We don't know better than an NBA coach what position player X should play, we don't know better than the president what the foreign policy of our country should be not because we are not as smart as he is but because we are missing data If you are a builder and I come and say: "I think you made a lot of mistakes" and my arguments are obviously flawed you will tell me: "Amigo, you are just wrong" You'll not get mad because your knowledge allows you to be in control; but if I come and tell you "I think you are the dumbest person I have ever seen"

Always check two things: who the one telling you that is and what their arguments are in most of the cases you'll realize pretty fast you shouldn't bother "You are never too old to set another goal or to dream another dream" if you will go to a retirement home one of the most painful things you'll hear is the amount of regret that retired people feel about not having the courage of doing this or that 5, 10 or 20 years ago Some regret not telling their wife or husband how much they meant to them before they passed out, others feel bad about not having any kids while others simply feel they were seriously not serious when it came to living their life properly

You don't want to reach that point and I always remember myself that when I hear my parents who are in their fifties now saying things like: "if I were 35 I would do this or that" Most of those things are still doable even at their current age; is not like they want to become professional athletes Still their mind is blocked inside the wrong paradigm and that prevents them from going after new and challenging goals and dreams I fully believe that you are never too old to set another goal or to dream another dream The fourth quote is: "Just because faith doesn't deal you the right cards it doesn't mean you should give up, it just means you have to play the cards you get to their maximum potential"

You hear faith related theories all the time because it's easy to say I failed with this business because my faith was to do some other thing How lame is that? Blaming an imaginary concept is the easiest thing you can do when you fail Allow me to give you a piece of advice: every time you are tempted to blame others or this concept of fate ask yourself one thing: "If I will accept that the main reason for my failure is fate what will I learn from this? What will be the one thing I can take from this episode that will help me to avoid the same result in the future?" You will find out that blaming fate teaches your shit because you will always be in a position to do that and you will learn nothing I left the best one, as usual, for the end The quote is: "Most people fail in life not because they aim too high and miss but because they aim too low and hit"

Think about two friends Jack and Tom They have the same background when it comes to their family and education, they both work at the same company on similar positions and both were very happy about their financial status They stopped interacting after Jack moved to Australia where his wife got a new job After three years they meet again when Jack comes to visit his parents When asked how life is Tom says: "You know, regular stuff

I work at the same company, was promoted once, I'm happy with the payment; it's not Wow but it's cool What about you? Jack starts his story with a big smile "You know Tom, I always felt like I could do more I was happy with the job I had here in the US, had a similar job in Australia at the beginning but if you can recall when we were young we always dreamed about having our own charity that helps people in Africa to get better education so they can enrich their communities with their new knowledge One day I decided to do just that and I aim to help 1 million people over the next two years

My wife told me I was crazy but it didn't matter: I had a dream I'm happy to tell you that this is my first holiday since I went to Australia and I took it because I managed to reach 1 million people I also received prizes for our activity from the United Nations and starting next year I will travel the world trying to convince other people who have the same dream I had to be courageous and try In our story Tom aimed too low and hit and because of that he was not willing to chase something bigger, a dream that would have made his life more fulfilled Think about it! As you know already I live a bonus quote for you: "If you fall, fall on your back because if you can look up you can get up!!!" That said I challenge you to be courageous and send a comment where you tell everyone which quote you liked the most and one episode from your life where you apply that or you wish you could have applied that

I'm super-pumped waiting to see your answers! i hope you enjoyed the animation and found my thoughts useful If you did please like and subscribe If you click that bell near the subscribe button I'll be very grateful because this is how we can stay in touch in the future Also kindly follow us on the other social media platforms you can find at the description As usual if you think this was a waste of your time dislike the video and write your feedback because this will force us to become: BETTER! See Ya!