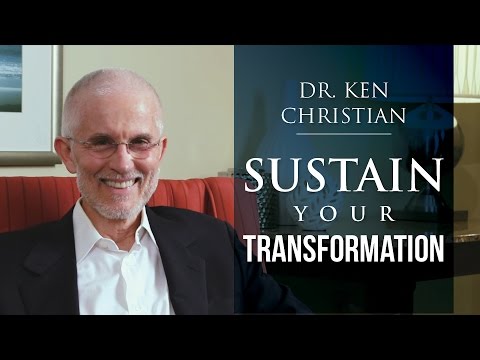 The fact that you've completed 12 or 13 weeks on it, doesn't lock it in, in a way that's significant But if you then go back to life as it was, and you crowd out the activity that you are needing to sustain forever, then you will overshadow that change and you'll have noise that gets in it's way You'll simply not give it the time and attention that makes it a permanent part of your life And the whole point of making the change is not to go for 13 weeks and say, okay accomplished that Is that this becomes a permanent part of your life

You don't want to overshadow it You don't want to crowd it out of sunlight and water and nourishment It is an organic part of you and for it to maintain it's position and to flourish and to become study and strong, you actually have to think in advance This thing is going to grow with me How do I create space for it? It may have to do with time you plot

It may have to do with attention I'm going to suggest to you it's going to involve both of those and in some way, you have to rehearse that new behavior in an on-going way to keep it alive You want to keep those neurons that have now fired together and wired together, you want to make that path like a royal highway You want to make it one of the big swaths in your brain The way to do that is to make room for it by continuing to engage and practice and to keep space, literally in your schedule to see to it that you keep it alive

That's going to take you very, very far, because it will solidify and it will simply go from being something you are doing to really who you feel you are And that's the shift you need You need it to go from something you are trying out, to a piece of your self-concept, because you know how powerful your self-concept is It's the one thing you don't take any nonsense information about Alright, there's more for you to learn about this, but you've got the essentials down, down

Since you're a high achiever you may know about this High achievers often hit a wall They're going along, they're having one success after another and then suddenly, something happens and they grind to a halt And it's confusing because they're not sure what it is they've done wrong if anything They just know that they're not moving anymore the way they're used to moving

The way they have moved in the past If you've run into like what seems like a ceiling over you and you're kind of in a fog and you're mystified by what's getting in your way, you can even kind of slide into a swirl of doubts and wonder if you ever really achieved anything significant at all and whether any of your amazing achievements you have done were anything but kind of fronting or a little bit of a fraud That is really negative and pernicious and it doesn't have to be that way I want you to go get a free report from me Go to DrKenChristian