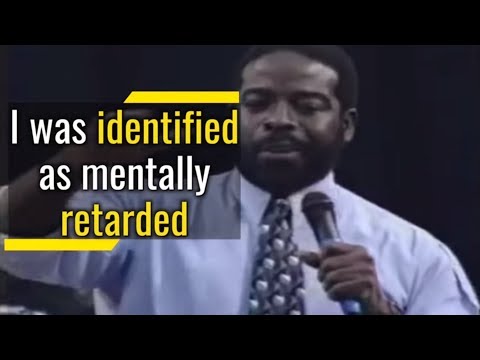 – I was identified as mentally retarded, put back from the fifth grade into the fourth grade, and stayed in that category until I got out of high school I don't have any college training

Bu this met a high school teacher who one day changed my life I was waiting on another student, and when he came in, he said to me, "Young man, go to the board "and write what I'm about to tell you" And I said, "I can't do that, sir" And he said, "Why not?" I said, "I'm not one of your students" He said, "It doesn't matter

"Follow my directions now" I said, "I can't do that, sir" He said, "Why not?" I said, "Because I'm educable mentally retarded" And he came from behind his desk and he looked at me He said, "Don't ever say that again

"Someone's opinion of you "does not have to become your reality" And as he talked, my heart began to beat fast Tears began to run from my eyes and I was in the back just listening to him, because the speech he was giving, that speech was for me And he said, "Les Brown, "if you want to do anything worthwhile in life, "you've got to be hungry!" I told him, "Mister Washington, "I wanted to become a disk jockey" And so I started working to develop myself

He said, "I want you to practice everyday "being a disk jockey" I said, "But I don't have any job now" He said, "It doesn't matter" He said that it's better to be prepared for an opportunity and not have one, than to have an opportunity and not be prepared And as I was working to develop myself, I applied for a job as a disk jockey, WNB on Miami Beach

" I said, "Yes, sir" I went back to Mister Washington and I told him He said, "Don't take it personally" He said, "Most people are so negative, "they will have to say no seven times before they say yes" He said, "Go back again

" He said, "No one was laid off or fired "Now, get on out of here" I came back the next day like I was seeing him for the first time I said, "Hello, Mister Butterball "How are you?" He looked at me with rage

He said, "Go get me some coffee!" I said, "Yes, sir" (audience cheers) And I went to get him some coffee After a while I would get their lunch and dinner, and I would go in the control rooms and I would take the disk jockeys there food, and I would not leave until they would ask me to leave One Saturday afternoon while I was at the radio station, a guy name Rock was drinking while he was on the air I was the only one there, looking at him through the control room windows, walking back and forth, young, ready, and hungry

Pretty soon the phone rang, and it was the general manager And I answered the phone I said, "Hello?" He said, "Les, this is Mister Kline" I said, "I know" He said, "Rock can't finish his program

" I said, "I know" He said, "Would you call one of the other DJs in?" I said, "Yes, sir" I hung the phone up I said, now he must be think I'm crazy I called my momma and my girlfriend Cassandra

I said ya'll turn up the radio and come out on the front porch I'm about to come on the air (audience cheers) I waited for about 20 minutes, and I called him back I said, "Mister Kline, I can't find nobody" He said, "Young boy, do you know how to work the controls?" I said, "Yes, sir

" He said, "Go in there and don't say nothing here" I said, "Yes, sir" (audience laughs) I couldn't wait to get behind those controls I put on a old Stevie Wonder record called Fingertips I sat down behind that turntable

I said, "Look out! "This is me, LB Triple-P, "Les Brown, your platter-playing popper "There were none before me, and there will be none after me, "therefore that makes me the one and only "Young and single and love to mingle, "certified, bonafide, indubitably qualified "to brink you satisfaction, a whole lot of action "Look out baby, I'm your love man" I was hungry! (audience cheers) I was hungry! You gotta be hungry! Begin to know that you have greatness within you, and if just one of you here began to envision yourselves as being blessed and highly favored to reach your goals, if just one of you captured the essence of what that means, that you have greatness in you and a responsibility to manifest that greatness, that you can make your parents proud, you can make your school proud, you can touch millions of people's lives, and the world will never be the same again because you came this way

It was hard, ladies and gentlemen, coming to speak to people And I was facing financial difficulties in my own life I was behind on my bills and my dreams, and I'm saying to them, you can live your dream! It was hard, ladies and gentlemen It was very difficult to pick myself up each day believing that I can do it There were times that I doubted myself

I used to ask myself, can I do this? And something said within me, you're the one Don't give up on your dream By continuing to push forward, by continuing to run toward my dream, that one day I would have my own talk show It's a long shot, ladies and gentlemen, from Liberty City in an abandoned building on a floor, never knowing my mother or father It's a long shot

Being here with you today in this dome in Atlanta, it's a long shot No college training Labeled educable mentally retarded, but I kept running toward my dream (audience cheers) Don't stop! Don't stop running toward your dream!