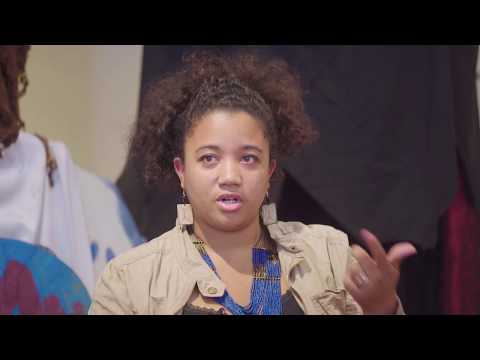 PC approached us about almost a year ago now to apply to an Art Place project, and we met with them– we met with them at that table actually– just here in the gallery and talked about what could be possible within a small footprint along Lancaster corridor, and what kind of work could we do with other organizations and entities along Lancaster corridor in the neighborhood to think about how art and safety could work together And so one of the things that we envisioned actually at that table was to bring folks together and have a parade and do all these different projects that together could be this cohesive multi-approach artistic project that brought the visibility of safety in the community– that positioned the 16th district and the police at the table as a member of the community, and to really lift up all those voices and hold space for all those voices that come together really equitably and then move that forward

And I think that one of the things that has happened is that everybody's been doing these different projects and Spiral Q has really been– our role at the table has really been to facilitate that coming together So we'll go into different neighborhoods and be the entity that is in touch with everyone and convening everyone and holding space as an outsider to have the conversations that need to be had to figure out what are the issues, what are the things that are important to the community, kind of holding space, inviting the public in And so we're sort of doing that here with that project, and it's really been amazing to just connect to in very tangible ways to all the other organizations, not all of them, but a good amount of the other organizations that exist up and down the corridor And I feel like the individual projects have– they have explored and pushed on some of the ideas around safety and community through this artistic process and their artistic processes, but I think the most lasting thing that has happened with us is that we're connected to each other in a way that we hadn't been previously, and I know that LISC has been a really big part of pulling us together and having us meet and giving us information together, but I think that this takes it to the next step so that we're able to convene ourselves, we're able to really have conversations and build those relationships so that beyond the scope of this project, we will be able to know one another and think of each other and call one another and brainstorm with each other and create other things moving forward (Liza) I think that going to those initial meetings that LISC convened for their first round, I believe, of arts place making type grants led to a couple of really important things for us as an organization

One was because of the nature of how the projects went, there was a required partnership between at least two different groups I believe, and we're used to partnering so that wasn't new, but because of that, we ended up in three different LISC projects the first year One of them was our own– the one that we led, which was a teen apprenticeship program, and we needed a public space to do that, and so we actually ended up, through our neighborhood, knowing the neighborhood well and knowing some relationships of who could make it happen is that we ended up in this gallery space, and so for the first time, I think it was in three or four years, we had a public space, and for the first time ever, we had visibility on the corridor Melissa, and probably sure David as well, will recommend us to other folks and say, "Spiral Q's doing great work Call them up" And I think that that recommendation goes very far

Melissa recommended us to work with PCDC, The Philadelphia Chinatown Development Corporation And so we had an initial meeting, and next week, after tomorrow, we're going to be doing another neighborhood parade in Chinatown that really lifts up the issues around the accessibilty to Franklin Square Park for a lot of the youth and daycares in the center that have to traverse sidewalks that are blocked by vans and then having to cross Arch Street, which at a certain point, opens up– it's like a floodgate of super fast cars and all these little small kids and children have to cross that street and so we're doing the same things again, working with different stakeholders in the neighborhood, but once again, there's a ton of advocacy in this It's four kids so it totally makes sense that it's a parade and we're making art, but it's a deep advocacy thing too because I want to change the situation there, and so for me, I think this barbecue's a perfect fit They may not have realized that they needed a parade and they might not want to do a protest, but it's everything Yeah, and so also that convening that I talked about earlier– I was like, "Well, we're convening here

" And we continue to convene different stakeholders in different neighborhoods, and so one of the undercurrents of that project, for me anyway, is to make sure that we're continually convening the stakeholders and having them listen to each other, have deep listening sessions– what is so important to you about your neighborhood? What are some of the other issues that come up and are cropping up around safety for our kids That's leading to culture– what about the cultural organizations? What about the specific culture in Chinatown is amazing and what do you want to hold onto with, again, lots of different changes that are happening in the neighborhood, and how do you get ahead of that to make sure you have a group of folks who are working on that already as opposed to being reactionary– like how do you get ahead of that? And so helping them to gel as a group in that way has also been really great and great for me– I was like, "I didn't realize I loved Chinatown so much," after being a part of this deep listening session and answering the question myself So yeah, that's one of the ways that LISC has supported us