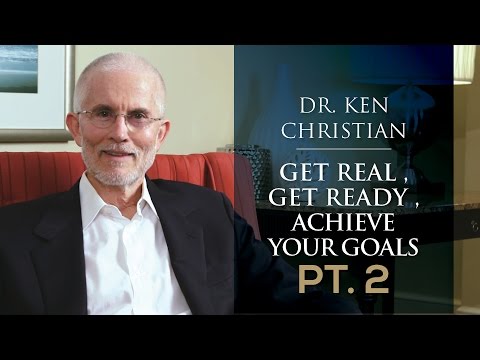 In the last video, I talked about getting real and getting ready Those are direct methods that you step forward, take action, for an objective that's important to you that you want to reach, a major transformational shift in your life

You get ready Now it's time to get going You start moving toward the goals you have and the objectives you have by taking concrete action that in the research stage, when you were getting real and getting ready, now what you got ready for you do So you take a course You hired that coach that's going to help you

You've gotten involved in a Mastermind program or a program that actually, literally is designed to guide you through this I've developed a program, and it's awesome! And people go through it, and it takes them there You also need to know real information, accurate information about what's required to make a transformational change A transformational change requires you not only to get real and get ready and then to take action You have to stay with it long enough to lock it in as a permanent fixture in your life

When you do that, it is uncanny the changes you can make with this four-step process Fifty years of research, as I said before, shows that this is how people do things like lose 100 pounds and keep it off permanently People have kicked serious drug problems, and done it permanently People have changed their careers in vital, transformative ways by following these four steps Get real

Get ready Get going, and then lock it in And here's what's crucial You have to be involved in the process of locking it in and getting real and getting going You have to–once you get going, you've got to go for 13 weeks, 12 weeks at the minimum

And here's what's weird A lot of people stop at ten weeks, just two weeks short It's like, for some reason, in people's minds, ten weeks is long enough And they're two weeks short of where the research shows lock it in happens There's something magic about 84 days, 12 weeks

I work with people for a 13th week because I want to really lock it in This is the magic You do it this way, and magic happens You are the creator of magic out of concrete actions, nothing ethereal, but what happens from there is possibility to recreate, recreate, recreate, like Matthew Andrae did Do it

You will be satisfied Since you're a high achiever you may know about this High achievers often hit a wall They're going along, they're having one success after another and then suddenly, something happens and they grind to a halt And it's confusing because they're not sure what it is they've done wrong if anything

They just know that they're not moving anymore the way they're used to moving The way they have moved in the past If you've run into like what seems like a ceiling over you and you're kind of in a fog and you're mystified by what's getting in your way, you can even kind of slide into a swirl of doubts and wonder if you ever really achieved anything significant at all and whether any of your amazing achievements you have done were anything but kind of fronting or a little bit of a fraud That is really negative and pernicious and it doesn't have to be that way I want you to go get a free report from me