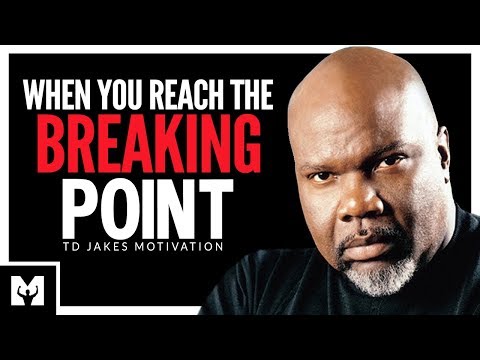 Everything you are going to be, you already are in another form You are the Acorn of an oak tree An acorn doesn’t look anything like an oak tree It doesn't remotely look like it would ever have branches and leaves and be productive

Where you started will turn into where you're going that's what destiny is pulling you into If you understand what I'm teaching, give God 30 seconds of a recital play Somebody is about to take flight Clear the runway, start the engine, buckle your seat belts Because God is teaching me, how to flow into my destiny What is killing you; is that you're at the breaking point Your strength is gonna make you tough enough to get there and your weakness is gonna make you humble enough to be grateful after you’ve arrived The power to make choices is one of our God-given gifts Choices, to choose to decide, to prefer to select, to elect a particular path or course is unique to us as a human species

The house we choose the jobs we choose the degrees we chose the subjects that we took, the books that we read the people that we befriended the choices that we make determine to a large degree the experiences that we're having in life if you made better choices, you could be happy if you made better choices, you can have peace of mind In fact even if you chose to think differently than you think you can have peace of mind most of us torment ourselves by choosing to reflect on things we cannot fix we cannot change, we cannot alter, and we cannot move And you are the author of your own misery, because of the choices

Only humans have the ability and the commitment to make choices He selects, he chooses Now sometimes to our own detriment Because I would suggest to you today that we are where we are today in part, as a result of the choices we made yesterday Purpose trumps profit Purpose trumps profit You don't always make a decision by the bottom line Sometimes you have to do things just because they're right Sometimes right doesn't look profitable in the short term but right will pay you back with interest if you hold on purpose trumps profit every time I've watched it for years guys who snatch after the profit, end up being nothing but if you search out the purpose, profit will snatch after you

This is resistance training it is pulling against it, that's gonna make you strong Every time it comes to control how you speak, how you understand or how you think if you resist it, it'll flee Now I don't care how intellectual, how refined, how conservative how prolific, you are as an individual all of us must be honest and admit that there are some times that we have gotten into things by our own devices and you look back as you mature at what you did yesterday and say what was I thinking what was I thinking to make the choice that I made, at the time that I made it? At the center stage we have a piano, a baby grand piano Glistening, shining, and bright, but it cannot play itself It is an opportunity if the right person doesn't touch it, it will never reach its potential The piano has existed so long that it will only give itself fully over to somebody who has invested enough time and effort in it

And they know how to get the most out of the same keyboard 88 keys on the keyboard, but it's the fingers that pluck it that control what it can produce so you go out and you buy you a piano and in your mind you think I'm gonna work on this and in a couple of months, I'm gonna do that too But when you get your piano and you get everything in place and you sit down at it and you get ready to play that doesn't sound like what I had in mind nobody clapped when I played it they don't like me You may really expect it to get the reaction of the maestro at a recital when your life is in a rehearsal stage

See you're trying to get a reaction that you haven't earned yet And if you're not careful, you will do this for a while and say that doesn’t work for me and now you got the clarinet and you’re trying to blow in it and then if you don't get a quick reaction from that you put that down and say that's not given to me And now you got a drum and you're beating on the drum, and you can't master that You cannot play the Super Bowl, if you don't make the practice You cannot get the prize for winning the Olympics if you don't make the practice You want the accoutrements of success and that's what's killing you you compromise the rehearsal time and bought the tuxedo for the recital Now you look like something that you're not We got people who want promotion without process Oh my God, I feel like running all over this church

They want promotion without process Because the reason they want promotion is because they have no self esteem So they need crowd esteem to feel good about themselves and they think that if they get promoted high enough then people will like them and then maybe they'll like themselves You got it backwards, you gotta like yourself first The reason you're not getting the promotion is because you won't make the practice I say all of that to say, it does not matter where you start it only matters where you finish The difference between start and finish is determined by how you handle the breaking point