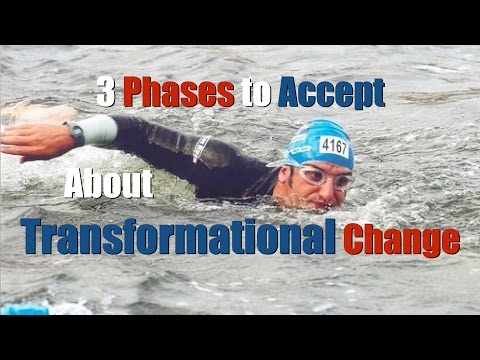 Hey everybody! It's Hari here How are you doing this week? This week I wanted to talk to you about the three R's to transformational change

Because often we engage in some sort of new activity and we go to these changes and the people around us can't understand them And sometimes, we get disheartened by them And I know I am engaged in a lot of you and you come to me and say, well, you want me to do this and I'm making these changes and now I don't know what to do because I feel like I should be drawing back to them Now the first stage happens usually when a new idea is presented, or you're doing something drastically different, you know, maybe you're, let's say you're massively overweight and you decide that you're gotta go run a marathon You might first be met with the first R which is that of Ridicule

And people just think "okay, they ridiculed a new idea; they you know, and this doesn't come with just obviously health and fitness; it comes to everything You know, when Einstein bought his ideas out, or when Newton bought his ideas out or Galileo or something like that All these new ideas, they first met with ridicule And then, they move on to the next stage which is that of rejection and resistance So, double R if you like but rejection and resistance

People start resisting the new idea You know, you can look around now with you know, changing diets for example maybe all these different diets that are coming out: paleo, vegan and everything else and that first thing that we've ridiculed and they're met with resistance and rejection And then, finally when you get through that, they've become self-evident reality And they become real and the thing that people tend to think "well, I never thought it was any other way" That might be when you're running a marathon and you know, five years ago, let's say you are really overweight and you decided you'd first got ridiculed about in about doing it and then you got resistance from your friends who will say "come on, come out for a little drink

Come out for a little a bit of cake Come out for you know, you don't need to get out in a Sunday morning so hard" You know you're getting all these resistance And then, finally, you know five years later, they see you and you're super fit and you've run about 15 marathons and they never even remember what it was like before you started in on a marathon because it has now become reality So they are your 3 R's

The first one being Ridiculed; the second one, a slash between resistance and rejection; and the last stage really being that, it becomes self-evident reality That's all I'm going to share with you this week because I think that sometimes when you're transforming your life in some way, you meet that first or second stage and you get disheartened, and I don't want that to happen to you So, if you are transforming your life in some positive way, then push on through that ridicule, push on through that rejection and resistance and then eventually it will become your reality And it will also become their reality So, forget the naysayers

If there's something that you want and it's gonna be a positive impact to you and hopefully the people around you, keep pushing through That's all for this week Bear that in mind as you go into this next week I love to hear from you about how this has helped you and any of the other videos as well So please do comment

Remember to subscribe to the channel because I'm really keen to grow this and spread these messages out to the wider community Until next time Have a fantastic week and I look forward to hearing from you soon Take care, buh-bye!