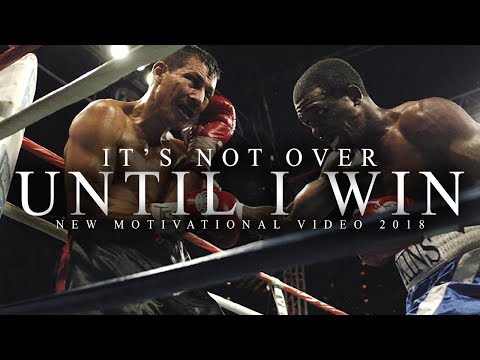 You've lost again and again and again, the lights are cut off but you're still looking at your dream reviewing it every day and say to yourself, it's not over until I win If you wanna make your dream become reality the people that are running at their dreams know that it's possible that you can live your dream that's it's necessary that you're relentless, that you have a plan of action, that you are creative

The people that are living their dream of finding winners to attach themselves to the people that are living their dreams are the people that know, that it's if it's going to happen it's up to them and they're resolving within themselves, it's not over until I win Listen to me very closely, winners win and losers lose And there are those of you out there, you lose it, and you don't deserve to lose you put in the work, you worked hard and you lose it and I mean you do me a favor this is a year to turn that around The people that are running after their dream know they're gonna have hard times, they keep on running because they're saying within themselves I'm the one, I'm the one, no matter how bad it is or how bad it gets, I'm going to make it The people that are running after their dreams are the people that are hungry Listen to me very closely some of you are broke listen to me, you flat-out broke right! you ain't got gas money and we're not just talking about money you've broken your relationships, you've broken your health and you're not broke because you have to be right! and I'm telling your whole life is gonna change If you would, if you would get off the couch, not playing video games When other folks are having a good time, you've got to have the strength of character to concentrate, to read, to digest information You've got to learn how to become resourceful You've got to learn how to become creative

like for real, you're broken, you're broke, you're broke stop complaining, stop going to a job you don't like, you are broke listen to me you going to a job you don't like, you been there for 15, 20 years, and I ain't tripping on the job I'm not even saying you should quit the job but I'm saying that after you get off work just like you invested in them, you need to invest in yourself And the problem is simple, you're not investing in your idea that you're always looking for a way to get over always looking for a way that you can break through and always looking for a way that you can strike a telling blow and your broke because you not getting the I you do not understand the I, I told you last week it is about an invention and idea And I've got to separate what I do from who I am Listen to me, you ain't got, your phone getting cut off, only listen to me you are broke You've got to make it your personal business to make it happen and you've got to resolve within yourself, that I can do this, that it's hard but you've got to say “I'm the one” I'm the one to make this happen, I'm the one to become successful in this business As you work to help other people to become successful, that feeds your success That if you want a thing bad enough to go out and fight for it to work day and night for it to give up your time, your peace and your sleep for it If all that you dream and scheme is about it and life seems useless and worthless without it and if you gladly sweat for it and fret for it and plan for it and lose all your terror of the opposition for it and if you simply go after that thing that you want with all of your capacity strength and sagacity, faith, hope and confidence and stern pertinacity if neither cold, poverty, famine nor gout, sickness or pain of body and brain can keep you away from the thing that you want if dogged and grim you beseech and beset it with the help of God you'll get it

It's not over until I win I asked him and said "how are you able in spite of all thet negative publicity saying that you couldn't win?" "How, how did you do it?" He said "I ignored my critics, I just didn't pay any attention to them, I ignored myself" because they kept on saying it so much there were times I doubted whether or not I can do what I needed to do see, the last chapter to your life has not been written yet and it doesn't matter about what happened yesterday It doesn't matter about the things that you've done, that you feel guilty about if you wouldn't do it today, you're convicting an innocent person So I really want to be a certain kind of person and I get a massive amount of chemical joy for being the kind of person I want to be acting in order to that, being tough, doing the work, grinding it out pushing forward, having a goal, going after it, developing myself, being the learner like seeing how much potential I can actually wring out of myself because this is what I do because, because of that neurochemical rush that I get every time where, and don't let Jayce hear this, but like when I'm up and I'm working at 4:00 am and I know all my employees are sleeping, all my competitors are sleeping and I'm grinding it out and when I got up at 4 am and I was working my hats off because you're wasting your life If you do all of that for something that you don't care about and this is where it gets terrifying You've gotta be excited about the future that you're building that is the key, you've got to be really amped up about it it's got to give you energy, when you think about doing that thing it's got a really amp you up, and if it doesn't then dear God, what are you doing? There's no moral obligation to go hard and live your life like I live mine but man let me tell you right now, if you're not doing things that excite you if there's nothing in your life that you've built into this incredible empire of excitement you are really missing out Someone's opinion of you does not have to become your reality The disproportional reason so many people in here will not win let's just get right to the chase the disproportionate reason that most people in this room will not win is actually not the hard work -which is what I'm going to talk about probably for the next 45 minutes- It's your lack of patience I think there's literally 300 million different ways to win in the U

S There is no blueprint, there is no exact way it only comes down to being able to factor in the 40 or 50 indexes input points, context points around your life and then navigating through that and so what, what I really want is for people to understand don't do it like me, don't do it like you, don't do it like Zucks, don't do it like Trav, don't do it like Cuban and the lack of patience is what hurts so many people If you decide in any particular area that you’re concerned about to make a conscious deliberate determined effort to read one book a month in that area in five years you'll be among the top 5% experts in the world I read a minimum of two books a week the average american reads only one book a year If you decide that area that you love that you are going to master that particular area in this era of accelerated change, overwhelming complexity and tremendous competition As you begin to develop and expand your skills and your talents and your vision of yourself you will always be in control of your destiny

And I'm saying to them “you can live your dream” It was hard ladies and gentlemen it was very difficult to pick myself up each day believing that I can do it there were times that I doubted myself I said "God, why? why is this happening to me?" I'm just trying to take care of my children and my mother I'm not trying to steal or rob from anybody How did this have to happen to me? it was very hard and here's what I want to say to you For those of you that have experienced some hardships don't give up on your dream No one could have convinced me by holding on by continuing to push forward, by continuing to run toward my dream that one day I would have my own talk show It's a long shot ladies and gentlemen from Liberty City and an abandoned building on the floor never knowing my mother or father, It's a long shot Being here with you today in this dome in Atlanta, it’s a long shot no college training, labeled ineducable, mentally retarded, but I kept running toward my dream you've lost again and again and again, the lights are cut off but you're still looking at your dream reviewing it every day and saying to yourself "IT'S NOT OVER UNTIL I WIN”