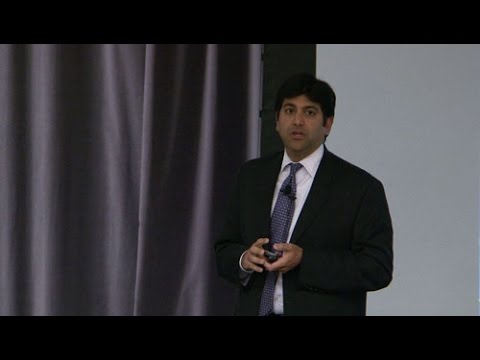 I wanted to share my first story with you on a very personal anecdote I, of course, you could tell from my name Aneesh Chopra, my parents come from India

I was born in Trenton, New Jersey And I had the pleasure of travelling to India with our President in November of 2010 and in fact, inaugurated the President's India-US open government strategic dialogue The basis for that dialogue was born in this graphic that you can barely see depending on where you are

It's a picture of the President having a conversation with one of the most rural villages in the state called, Rajasthan The back-story is as follows: the government of India has made connectivity to rural communities a priority And the Chief Technology Officer equivalent, a gentleman by name of Sam Pitroda, had been putting in place a strategy to bring fiber connectivity and 4G WiMAX towers to each of the rural villages throughout and they had about 250,000 of them, they're called panchayats And the first one of these had been lit up in time for the President's visit We were in Mumbai, which is a major metropolitan area

And before the President addressed the students at St Xavier's College, he had the chance to walk through an expose of all of these innovative uses of open technology in the advancement of democracy in India Culminating in this conversation that he had with individuals that lacked access to indoor plumbing, or what you and I would consider to be traditional infrastructure Yet they had 4G and it had transformed their lives A nurse told the President, how now she has access to information to know exactly which kids in the village, to make sure that they were on track with their health care

A student, not unlike many of you in this room, had the chance to communicate and take actually an MBA program, Tina, an MBA program from this village without having to travel and leave his family And it was in this context where the President spoke about a very interesting phenomenon that opened this and technology have now enabled around the world; the concept of leapfrog The President saw all of these and is thinking himself, what will this infrastructure do; to think about the health care system, the energy system, and the education system for that village And he remarked about the power in some of these emerging markets where you'll see that leapfrogging off of what we have today in our 20th century infrastructure