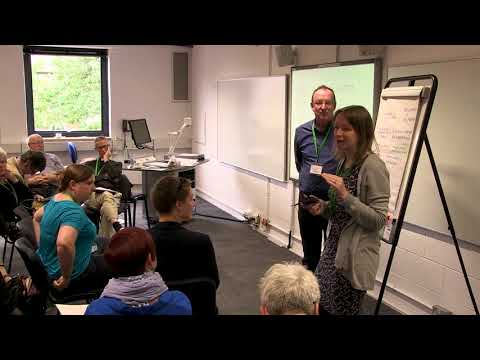 We also picked up on your point about that mutuality of recognizing it might be people who thought that they were being the missionaries who were changing rather than the other people but I guess that's quite a difficult thing to admit, isn't it, so it would be interesting to know more about how that realisation came, for the team at Eden Was that difficult for people? I think it was challenging for people in different ways and at different times so it's a very incremental process when you're living somewhere these things happen very quietly, very gently, very much likeso an example would be an Eden team leader I know he began to meet up with a guy who he'd got to know in his area and his normal habit would be, they'd go out for coffee and he'd buy the coffee and so that's just an instinctive thing that he would do After a few times, the guy said, 'Oh, I'll buy the coffee' and the Eden team leader was like, 'No, no, it's alright', knowing that he didn't have a lot of money but then beginning to recognize this man's discomfort with always being the one for whom coffee is bought and so gradually over time these realisations are happening and it happens in these tiny, incremental steps, and actually maybe that's part of the gift of it because if that realisation slapped you round the face all in one go, you might crawl into a hole and not come out for a while The problem seems to be the person buying the coffee wanted the power still – you said they felt uncomfortable about relinquishing that authority and power Yes, and I guess the way he would articulate that I think would be that he felt it was his job to buy the coffee that he was the one who had more than so it's all about how you view the other, isn't it? If you have a view of the other that they are deficient, that they are lacking in some way, that they don't have anything to offer and you are the one who has something to offer then you position yourself in that way, and that's destructive for both sides because what Eden team members then discovered was sometimes they don't have anything to offer