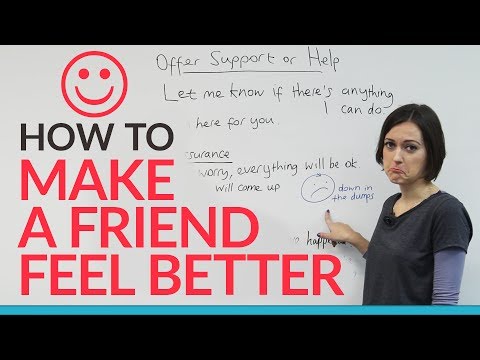 What we're talking about today is saying the right thing when you've got a friend who's feeling down, your friend's got a problem We're specifically talking about a friend who has lost a job, but you could use the same advice for a friend with a different problem; a friend with a breakup or some other emotional thing that's happened in their life So the formal word for this is: "consoling", "to console" someone, but the more relaxed way could be: how to make somebody feel better about themselves or their problem So what should you do in this situation? Well, a lot of the time, when people have a problem, they just want to talk to someone Maybe they're not seeking advice

So what can you do? You can ask questions So remember we're talking about somebody who's recently lost a job or is losing a job, we can ask them questions We can say: "What are you going to do now?" Maybe your tone of voice wouldn't be really positive like that It would be more like: "Oh, what are you going to do now?" It would be more soft You could say

This is This is an indirect question "Have you thought about?", "Have you thought about training again?" This is a way of This is a suggestion Or you could say: "Are you looking for another job?" So this way, your friend can just start talking and maybe that will help them in their difficult situation Because, as a friend, you need to "be supportive", helping your friend out when they need help You could "be a shoulder to cry on", that's an idiom for somebody who just

Who just needs someone to share their feelings with If you're a shoulder to cry on when your friend needs you, that means that you're a good friend And here's another expression: "A friend in need is a friend indeed

When your friend has a difficult situation, watch out that you don't give advice that they're not asking for because a lot of the time, people don't really want to hear your advice – that's the truth maybe If you ask someone for advice, it's different I've had a couple of times in my life where someone giving advice is that probably had the opposite effect from what they intended; the advice is not felt right or something I haven't liked about the advice, and then it can be Then it can be a problem So if you say to your friend who's just lost their job: "You should get down the job centre" The job centre is where you go if you haven't got If you haven't got a job in England and you need some money and support from the government If you said to your friend: "You should get down the job centre", they might not They might not be

They might not want your advice right now Another way you would give your friend advice is if you said: "If I were you", "If I were you, I'd go to my boss and say: 'Look, you're not going to fire me All right? I dare you to fire me

'" Well, your friend might be like that, but this might not be something you want to do Giving direct advice What should you do if giving direct advice could be a little bit difficult, a little bit tricky? You could try making these indirect suggestions, a bit like this one "Have you considered Hmm, I'm sorry to hear that you lost your job You must be feeling awful Have you considered calling your colleagues that you used to work with to tell them that you're looking for a job now?" Or: "Have you thought about Too bad you lost your job Have you thought about becoming a movie star?" You could indirectly advise your friend to do that The main The main reason it would be better to make your suggestion like this is that this avoids giving condescending, or patronising, or unsympathetic advice to someone These are long words, but they're not that They're not that complicated "Condescending", is like imagine you're in this situation: you've just lost your job and somebody says to you: "Why don't you start looking for jobs on the internet?" That would be a little bit condescending Right? Because you know You know how to look for a job What if they said to you: "Don't worry, I'm sure you'll eventually get something I mean you don't have many qualifications, but you'll probably get something eventually"? That might be patronising; your friend is seeing themselves as: "It didn't take me long to get a job, but, you know, after a few months, you'll probably get something You can work your way up" That would be patronising

And "unsympathetic" would be like: "Oh, you lost your job Oh, yeah So, do you want to go out now?" Unsympathetic is somebody not listening to you So what else can you do? If you're in this situation, you can share your experience with your friend Share your feelings and the kind of things that you've been through in your life

So here's some sentences: "When I was made redundant it was a big shock" What does it mean to "be made redundant"? This is when your company decides that some people are going to get fired, some people will lose their job, but it's not always because you didn't perform well at your job; it's just the company decision: 10 people have to go, you're someone who's going and they pay you, generally, when you're made redundant So when you share your experience with someone, that makes them see that maybe there's light at the end of the tunnel There's another idiom that maybe things will be better They don't seem good now, but maybe things will be better after

Here's another example: "When Sally lost her job she took the opportunity to retrain" If someone's feeling bad, they might just be focusing on the negatives like: "Oh, I'm never going to work again It's awful I love that job" But then they just might be talking too negatively, so you can make

You can make a suggestion You can share an experience that shows that from change can come something good And here's another example: "At first I was anxious"-talking about when I lost my job-"but I soon saw that it was a blessing in disguise

" And that's the idiom or expression for when something seems bad, but in the end, it was the best thing that could possibly happen When we come back, we will just look at a couple other phrases we can use for this situation Let's take a look at what to say to your friend who is down in the dumps, feeling a bit sad because they lost their job What else can we say? So you could offer your support or help So here's some phrases you could say: "Let me know if there's anything I can do

" That's a very sweet offer for your friend who needs some help right now Or you could say simply: "I'm here for you if you need anything" What about reassuring your friend? "Reassurance" means saying like a positive message to them so that maybe they feel more hopeful about the future "Don't worry, everything will be ok" What do you think about that one? Yeah, I think like in general, eventually everything will be okay

So you can turn that sad face into a happy face But we can't say: "Up in the dumps" It doesn't work So, yeah, so sometimes if you If you've been talking to a friend for a while and they're just going on a bit now and, you know, they're all sad and crying or something – what can you do then? Well, you might consider making a joke of the situation I don't know if you do that in your culture But in British culture, sometimes in this situation, someone would make a joke And maybe at first that joke sounds quite mean, but it does something to just change the focus of the situation so

We've all been upset, someone makes a joke and it's like: "All right, it's time to stop crying now" So I thought of some things people might say They might say something like this, this is an expression or idiom

So your friend's just, you know, letting it all out, is upset and you could maybe knock them on the arm and say: "Cheer up worse things have happened!" in a sort of positive, but jokey voice at the same time Or you could say, you could have a pause and say: "Yeah Hey Guess what? Did I tell you? I just got a promotion!" Joke That one's a bit mean, so I maybe wouldn't advise that one That was a joke of what joke probably not what Probably you shouldn't do So let's call that one a bad joke What if you already knew that your friend had lost your job and stuff before you met up with them? So you're anticipating maybe some kind of emotion situation When you see your friend, you could say: "Hey Why the long face?" That's another joke because you know that your friend is upset because they lost their job

When somebody's got a long face, it means they're sad, a bit like down in the dumps So, yeah, you've got some phrases now and hopefully that can help you in the future in that kind of social situation where someone needs some help or just some kind words from you So if you want to look at this a little bit more, go to the website and have a look at the phrases on the website We Yeah, if you do like this lesson or my other lessons, I'd really appreciate it if you'd subscribe to my channel and also my personal channel because I've got two YouTube channels, so you can watch me on engVid, you can watch me on my personal channel as well And, yes, I'm finished now so I'm going to go All right? Okay, see you See you