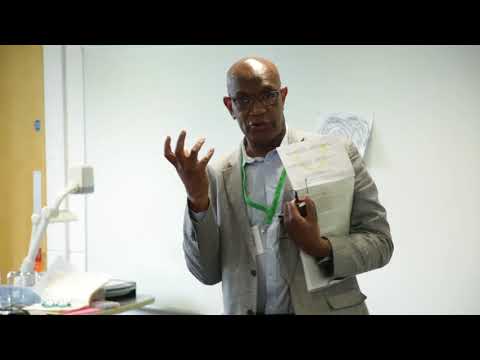 While I was in South Africa, so, my impression of South Africa had been gained from Methodist ministers from South Africa whom I had met here, including Jenny, my wife, and people like Brian Brown who are people who had been deeply immersed in the struggle of South Africa during the apartheid years and I got an impression of a church that was transformed, transformative, vibrant and going with all the social transformation that one could imagine I got there and found a church, a church, I was appointed to churches in the western cape, on the outskirts (There's another South African here, that's why there's amusement – a couple of, a South African contingent

) On the, in the western cape, on the fringes of Cape Town where it was a mixture, and please, these are terms that are still used in South Africa, black, coloured and white The church for which I had primary pastoral responsibility had been a predominantly white church but was right on the boundary of a community that was being transformed, that was changing It was, it was the meeting point of three different communities in the southern suburbs and the church was trying to find its identity This is in 2011, end of 2011, 2012, years on from the 'big bang' of 1994 where we said all has changed, all is new and it wasn't so People still did not know what it meant to be part of a new society and my being invited to that particular church was in some ways a compromise – this, they told me this afterwards, by the way

They never tell you these things when you're being stationed – was a bit of a compromise because the church had historically only ever been led by white men there wasn't a white man available; the next best thing was to get someone who was from England even if he wasn't white And with a name like Kirby, no-one could guess what complexion this incoming minister might have been until he actually got there, so they are told the Rev Ermal Kirby, a former District Chair, is coming and they said, "Oh great! We'll have him" And, and then I turn up And it, and it was a wonderful learning experience because within the time that I was there I also spent some time working not only with that church but I became circuit superintendent and looked after one of the coloured churches and one of the black churches on, in a settlement and I began to ask the question: How do we get from where we are to where we need to be in South Africa? What is it that's going to transform this fragmented community, with all the anger, the pain, the misunderstanding that is there, and the frustration of lack of opportunities into a community that releases the potential that was also equally evident within the community in a way that everyone participates and feels 'this is me, this is, this, I am South Africa' and there wasn't an easy answer, there was no answer, and what really horrified me was the feeling that no-one was in any focused way addressing that question within the society, within the church The church was, some were going down the road of saying let us go down the road of charismatic renewal so thirty minutes of praise and worship at the beginning became de rigueur in whatever church you were, and if you didn't have a worship band, you're going to be left out so everyone must get a worship band because that was the way to make sure you at least survived for a bit longer and the church leadership had no sense of how do we begin to meld together this diverse community so one would to go synod, the gathering of the ministers of the area, and there would be visible divisions even though there was no apartheid

The black members would largely sit together by choice The white members, the white ministers would go off for their coffee at Starbucks and come back and bring it into the, into the hall The coloureds would stand around looking quite lost in many ways and not knowing where they fitted Four years of that and I began to say well what on earth is going on here The Lord has ways of intervening

Jenny, my wife – it's our second marriage – her son was then recruited back here to England and we began to think well the idea of settling in South Africa, because all of Jenny's family is in South Africa, including five brothers and five sisters, all within a two mile radius of where we were suddenly becomes thrown into question because now son and grandchildren are going to be here and we're going to be there – is it still a good idea to be there when they are here and in any case, with another year or two to go before retirement do I really want to give up, and the church in South Africa was saying quite explicitly, no-one can have pastoral responsibility after the age of 65 because we've had all of these white men who have hung onto their positions and not given the chance to the black, upcoming black ministers for them to have a go at some of these stronger churches So I was caught, so I thought well maybe before I'm completely forgotten by the home country can I sneak back in, get an appointment, and perhaps ask the church, can I have some time to think about these questions? because they were some of the same questions I was facing as chair of district in London before I went I was now confronting in South Africa And the Susanna Wesley Foundation – bless them – said, "Oh yes, we think we could provide you with a part time post – we have this project, cultural diversity and circuit ministry that we were wanting to start The senior research officer was going to do it, but we think it might be something that you could do on our behalf" I said, "I will give it a go"

And so for the first year I was having interviews and reflecting on the experiences of ministers who were engaged cross-culturally – white ministers serving black congregations, black ministers serving white congregations And the question that arose out of those stories was: how does change begin to happen in the life of the church And it was that reflection that at the end of that stage of research drove me to recognise that what was needed were models of transformation, so we had a symposium here among the staff at at Susanna Wesley Foundation where I first met Megan from South Africa though she's lived all over the world, still South African, which, and she introduced me to the idea of Theory U because I wanted a vehicle for the reflection on my research that wasn't going to a simple standard framework of here's a research report It was, I wanted it to be a conversation, and Theory U was precisely that It enabled me to be able to say, "Are you willing for us to go on a journey where we co-initiate, we sit in a room together, where we are telling, we are listening to what the presenting problem is the listening, the downloading, the owning, the co-initating, saying, 'there's something to be fixed, even though we might not fully know what it is' Do we then go in through that process of the day into a stage of co-sensing, being able to feel what it is that each person experiences around those questions, not only just here, but to listen with the heart, and to sense the sensitivities around those questions and can we go to that deeper place that Scharmer calls the presencing just being still there, holding that pain, that frustration, that uncertainty until something begins to emerge?" And I was saying just yesterday I think it was, if I dare as a mere man use the analogy, it's almost like going through the birth, the labour pains, or saying something is coming to birth, it's not yet fully ready, but we know we've got to stay with it because if we don't stay with it, then nothing further will come, and from that presencing, that drawing on the energies and inspirations that we all carry within our stories, can we move forward to a place of co-creating, co-creating, giving birth together to something that is different from anything any of us could have given birth to separately? And having given birth, can we then co-evolve, can we move forward, change the structures and processes in order that we might enter into a new future together? That model was what I got out of my work at Susanna Wesley Foundation And that model, I suddenly realised, was the model for social transformation and spiritual transformation and, I began to think, maybe had been implicitly at work at different stages in my life So let me just quickly give a couple of the examples A friend – at least she was a friend – she invited me to come and do some reflection with a circuit about their way forward

"We've been having circuit review", she said, "and we've had reports and analyses and we're not quite sure where we should go from here Can you come and help us?" And so I go along on the Saturday and without telling them what I was doing, I began the Theory U process getting their stories, what it is that has brought them to this point and it was at the stage when we were at the presencing drawing on what is it that inspires them, what is, what are their, what are their identities what stories do they inhabit that there began to be a restiveness within the group because they had expected a simple linear process of going from analysis to conclusion – this is how you solve it: "Come on Ermal, you've been a district chair for 13 years tell us how to fix the problem in the, in the circuit!" And the group – I was doing some input and then offering them to go into groups, they, one of them was honest enough to feed back and say, "We don't know what's going on We don't feel that we're getting anywhere and we're more than half way through the day" At which point I introduced the Theory U concept to them and said, "This is where we are and what you are expressing is precisely the birth pangs You have dug deep into your own stories, you have begun to shape some possibilities, you see them emerging, and now we've got to frame those together, and you've got to frame those and take them forward

I can't give you the solution but you are now on a journey that is for you to complete" And it was as if lightbulbs were going on all around the room because people could suddenly realise this is a different process and a process that involves me in the change; I need to change if there's going to be transforming of the community So I left them and said, "I will listen with interest to what comes out of the circuit as you continue that journey" But they got it – what we had tried to model in one day was a process that they now recognised had to be ongoing