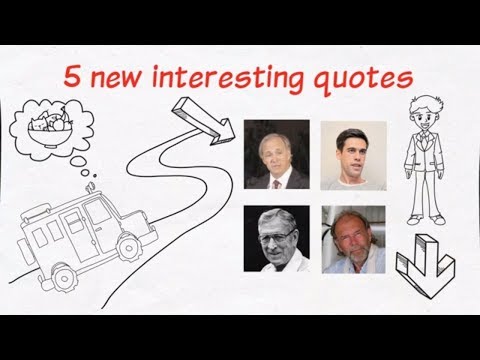 Hey guys! Today we will continue our journey and discuss five new interesting quotes which have the potential to grow fruitful questions in your mind Let's see who we will meet today: Ray Dalio, Ryan Holiday, John Wooden and Richard Bach

The quote from Ray Dalio is: "Make your passion and your work one and the same and do it with people you want to be with" Whenever you ask for career advice eight times out of ten you hear "follow your passion" Well, this phrase became a cliche but it makes sense from many points of view It's pretty difficult to be a hard worker grinding 80 hours a week on something you are not fully into I created this YouTube channel because I felt that I have something to say and put my 100% in creating useful content even if this is a side hustle

I love my company and the people I work with but when you have the feeling there is some music inside you that will kill you unless it will be expressed it's a clear sign than it has to be done Is this my passion? Well, it's too early to say, but I like writing scripts recording and posting the final results on YouTube Same as I like posting on the other social media platforms and interacting with my followers Working with people we enjoy is more important than we think because when you build something from scratch you face adversity and multiple desperate situations when the links between the people involved are the only real tool to push things forward I think Ray is right and his 40 years plus of experience are a solid argument for why we should listen to him

The quote from Ryan Holliday is: "Your potential, the absolute best you are capable of, that's the metric to measure yourself against Your standards are Winning is not enough People can get lucky and win People can be assholes and win

Anyone can win but not everyone is the best possible version of themselves" I absolutely love this quote but I love Ryan even more because of his unique capacity to explain concepts from centuries ago and put them in modern context The question everyone should ask themselves is: "How will I measure my life?" This basically asks for another question: "What do I call success?" When we hear these questions we tend to agree with the necessity to answer them but soon after that we simply quit the thinking process This is too bad because being capable of introspection is what I call a master tool

If you have a marketing company, how many times have you thought "if I will get that huge client it will be great!" Soon after you accomplish that goal you realize that it's been a cool achievement but now you'll focus on on an even bigger possible client The more we move forward, the more we grow our business the more we realize that we need a non-material target, something we don't have to chase, something which happens as a consequence of your own natural progress and development Ryan says everyone can win and if you look around you will see how right he is When things are not going amazing in our lives we tend to envy all kinds of people who buy conventional wisdom are successful

We think they don't deserve to win, we do We think they cheated the game and even if they did it that's just a clear sign that everyone can actually win once Sure, sometimes once is enough but what if it isn't? What do you need to win multiple times? You need to become better and better You need to progress towards your maximum potential This potential goes higher and higher the more you work and develop yourself but you don't really care because the progress feeds you

You start to ignore the moving target John Wooden comes with a really interesting perspective: "Do not let what you cannot do interfere with what you can do" When I was younger, before I started my own business I was going pretty hard on myself when it came to what I was capable of I felt that I was not doing enough to have a solid skill set that will allow me to build a company I was looking with a lot of admiration at the people who had their own business and I was comparing myself to them

It was damn painful because I was not able to accept that I was just 20-something so obviously I didn't spend enough time in this world to accumulate the same knowledge as someone who is 35 or 50 In many cases we are so absorbed by the areas where we are lacking and we lose valuable energy thinking and analyzing those things That time could be much better spent if we started building a plan in two phases: what I would like to create and second – what are the skills I would need to develop in order to become a better version of myself, a new me who will be able to execute what I planned? If you want to become an amazing chef or husband you shouldn't spend any time trying to become better at washing your car or studying advanced chemistry formulas Always remember bet on your strengths, The fourth quote comes from Richard Bach: "What the caterpillar calls the end of the world, the master calls a butterfly" This quote is pretty amazing because it speaks about our fear of death as well

Generally we are afraid that once we die everything we are disappears What if that's not the case? What if there is something more interesting and beautiful than living in a physical body? What if we are the caterpillar whose destiny is to become a superb butterfly but she doesn't know it? What if we are here in this world just to learn a few things which will help us in a possible future existence and what if one of those things is not to be scared about losing this cover we now name body? Even if I'm wrong, thinking that there is something after we die it's a positive perspective about life One might say "Yeah, but there is no proof that something exists" I would answer there isn't a proof that nothing exists either so it remains up to us what kind of narrative we would like to have about our existence: a positive one or a negative one just because we are afraid of being wrong when we think that our spiritual existence could go beyond this life On top of that if there isn't anything after we die it won't matter if you were wrong will it? The last quote as I told you is a personal creation and this is the reason why, if you have time to spare, I would like you to comment upon it

The quote is: "Whenever in doubt, go with a courageous alternative Even if it fails at least you had the guts to make a brave decision Regarding this idea I will say just that one of the things I'm most afraid of in this life is regret Thinking about my past and regretting the things I wanted to do but I didn't for some reason panics me a lot more than failure or being embarrassed These were the five quotes I prepared for you today

I hope you found them interesting and my explanation useful If you did, kindly like the video, subscribe and click the bell next to the subscribe button because in this way you will not miss any of our future animations Also please make sure you follow us on the other social media platforms you can find in the description We are building a pretty nice community and I would really enjoy having you a part of it As usual if you think this was a waste of your time dislike and comment because this will help us to become: BETTER