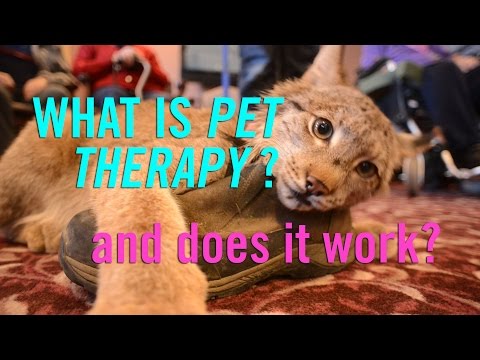 Hey there, Wonder Warriors, welcome to my home on the farm This is Diesel; here's Boots; and this guy is Crisco

Needless to say, I'm a bit of animal person In find that when I'm feeling down or stressed out, interacting with animals can be a surefire way to feel better I'm curious though, how much of this "pet therapy" is actually a really thing, or is it all in my head? Can animals feel the same emotions the same way humans do, or are we anthropomorphizing a little bit? Ultimately what's the science behind pet therapy? It's pretty obvious that we form strong emotional connections with animals, but why? I was surprised to learn that animal-assisted therapy is an actual practice We stick our "claws" in his feathers on his neck and head And then just scratch and tickle and he gets all fluffed up, just like that

A good friend of mind has a business that specializes in this, so decided to get his opinion on the subject What got you into it, this exotic animal therapy stuff? Me and a friend had our own pet parrots, and when you have pet parrots, it's drilled into how much social attention they need In order to give them that attention, we would volunteer at a local nursing home But this turned out to be so popular with the residents, it became a two-way relationship basically and long story short, we now run Canada's largest pet therapy program But what exactly is pet therapy? It's very simply, positive interactions between people and animals The other way he likes to be held, is like a baby

something that everyone has in common, is that they love animals Because animals are living creatures, many of which are social animals, which have similar emotions and similar social structures to us we can elicit the same kind of positive responses between an animal and a human that we do in a positive interaction between two humans Does the science say anything about what's going on when you're interacting with the animals? All of the same neurotransmitters, all of the same social circuitry in our brain when we're interacting with people, very very similar when we're interacting with animals It turns out we have specialized brain cells for recognizing animal life And get this: some Boston-based researchers identified similar brain activity when mothers viewed images of their children or their dogs There's all kinds of studies about if you touch someone just the benefit of touching someone, having physical content the exact same effects when you're patting an animal And we're both getting positive emotional benefits, and hormonal benefits and social benefits from that interaction There's lots of evidence that animals do help with stress relief In one particular study, people were more likely to survive for a year after having a heart attack

IF they had a pet Now call me skeptical, but don't our animal friends have to understand us to provide animal therapy? Do you really think animals feel the same kinds of emotions we feel or are we anthropomorphizing a bit? People are very much in the habit of anthropomorphizing They do it A LOT

In other words, natural selection favoured genes that regulate their aggression, learning and following rules, and forming attachments which is the essence of "social competence" according to psychologists Now what about cats? When I was playing with Aspen, I'm pretty sure we actually did develop a true connection Well you're an especially good cat toy for the lynx Aspen, because you're especially smelly you're very low to the ground, so it was very easy for her to practice pouncing on your neck and batting your hair

Whether your with a house cat or a lion, they will treat you exactly the same way Cats are all assassins in teddy bear outfits It sounds slightly cynical but a lot of evolutionary biologists see the phenomenon of pet animals as animals tricking us into thinking that they're cute and doing things for them like shelter, which protects them from all the predation like free food, which they no longer have to hunt for we give a lot to the animals and they're basically conning us They're manipulating us! They are emotionally manipulating us but in a positive way At the end of the day, does it really matter whether the empathy we prescribe is real? Not for the sake of the pet therapy

Yeah, you still feel good in the end Anthrozoologists say we've been getting pets for years to fill our need for social connectedness For me, playing and exercising my hyperactive dog and cleaning the stalls for the horses has therapeutic value Coming Boots! Since our pets depend almost entirely on us to fulfill their needs Maybe they help fill out need to nurture other living beings But I want to hear from you I'm curious if any of you animal lovers out there are willing to share your stories of how your pet might've helped you overcome depression or anxiety If you're willing to share your story, post in the comment section below or ask any questions you might have about the topic Don't forget to hit the subscribe button to get regular updates on when more awesome content about the science of mental health comes out See you next time Wonder Warriors!